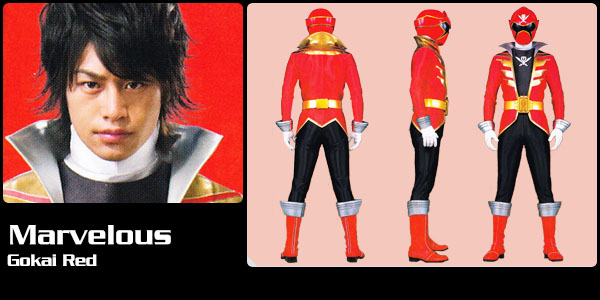 Full Name: Captain Marvelous
Ranger Destinatiion: Gokai Red
Weapons: Gokai Gun, Gokai Sabre
Gear: Mobirates
Machines: Gokai Galleon
He is the young Captain of the Gokai Galleon who becomes Gokai Red. Marvelous was originally a resident of a planet invaded by the Zangyack before turning to piracy. While raiding a Zangyack treasure depository, Marvelous found a Aka Ranger Key and encountered Aka Red. He recruited him to the Red Pirates while telling him to never give up if he wishes to obtain the Greatest Treasure. His shipmate Basco betrayed him and Aka Red, and Aka Red seemingly died, protecting Marvelous and giving him the Ranger Keys, Navi and GokaiGalleon. While he has no idea what the Great Treasure is supposed to be, he makes finding it his only goal in life, eventually forming his own crew of space pirates whose members also share his ideal. Marvelous is an unpredictable sort of character who does reckless things to satisfy his curiosity, stating his actions as what any pirate would do in that particular moment.

He usually seen exercising himself by wearing a heavy bracelet while playing darts. But his sense of responsibility as a leader is still very well intact, as shown when if his crew is ever in mortal danger, he would sacrifice himself, much like Aka Red did for him, to ensure their safety. His strength is displayed in a flashback in episode 12, where he rips the Zangyack tracking collar off Joe's neck, as well as in episode 21, where he rips the Heart of Hades right out of Ryuuwon's chest. Marvelous' bounty was already established at Z=1,000,000 and raised to Z=1,500,000 when they get to Earth. This is eventually raised to Z=3,000,000 and then Z=5,000,000. After the death of Warz Gill, Captain Marvelous' bounty achieved the "Unlimited Reward" status, implying that anyone who takes on and completes the task can name any price that comes to mind. Even though he doesn't want to feel anything for Sally who Basco used, he got close to her and Basco let a bomb go inside of her. Marvelous was knocked out but survived. Captain Marvelous manages to defeat Basco to retrieve the five remaining Great Powers that the privateer had stolen.

In Kamen Rider × Super Sentai: Super Hero Taisen, Marvelous leads the Dai-Zangyack to obtain the Great Power of the Kamen Riders and the "Ultimate Treasure in the Universe."